Age hierarchy and Confucianism in the ESL classroom Age hierarchy and Confucianism in the ESL classroom

In my last post I briefly mentioned ‘age hierarchy’ in Korea. In this post I will talk about the influence of
Confucianism and age hierarchy in the classroom.Since the dawn of Confucianism in Korea some 2000 years ago, the Korean society has embraced it. You can see its influence in the very social fabric of Korean society. You can notice it the way Koreans conduct themselves, the way they speak, in the numerous social customs and other nuances.

Challenges due to Age Hierarchy and Confucianism in the ESL classroom

This brings us to perhaps one of the most prominent imprint of Confucianism in Korea ‘age’. Age is important to locate somebody’s place in the social hierarchy. It is a society where there are certain rules of politeness related to placing people on the social ladder. One of the most common question when you encounter someone for the first time is “what year were you born?” Or “How old are you?” Or another variation on the same theme. This information helps them to know how they need to address the person in question, how they should speak to that person… etc. Relative age is important in determining how one talks and relates to the other members of the group.

Western nations value individualism and self-reliance. Speaking up and speaking out is valued. In contrast, modesty and humility are important in Korean culture. Koreans consider it ‘good manner’ to be humble and to follow the leader without question. It is common for students to understate her/his abilities and skills in the belief that doing otherwise would be rude or, that lower level students will loose face due to their lack of skills in English.

It is very common when friends or co-workers join a class together. Even though a few of them may have better language skills than the rest of the group, they avoid answering in class and try to stay away from any situation that can show off their English ability and therefore set them apart from the group.

One reason for such behavior is of course the ‘communal mentality’ or ‘group dynamic’ that is deeply embedded in the Korean society. The socially acceptable behavior is the behavior which best benefits the group, not the individual. Another important reason is the fact that in Korean culture ‘losing face’ should be avoided at all cost. If a student shows himself/ herself to be better than their peers, it is considered rude and socially unacceptable. Since by displaying their abilities they are inevitably putting others on the spot and consequently making the others lose face.

Korean students also tend to speak very little, avoid eye contact and generally stay away from giving their opinions. When they do speak many students stick to brief responses usually a sentence or two. While many teachers may take this as a sign of boredom or lack of motivation, it may be due to several social dynamics.

Due to the influence of Confucianism in Korea respect for elders is a must. In the classroom regardless of the age the teacher is the authority figure and therefore considered an elder. Confucianism values showing respect to elders above everything else. Students view being quiet while the teacher is speaking and following the teacher’s opinion without question as a sign of respect. They believe that they learn from their elders who are wiser, which in this case is the teacher.

Also sometimes when you have mixed age groups in the class, the younger students tend to be quieter. You can notice it especially when an elder student in a group discussion is talking, other younger Korean students tend to be quiet so as not to disrespect this elder’s authority. Oftentimes the younger students agree with the opinion of the oldest member in the group. They do not provide a counter argument even though privately they may feel differently and may not agree with the older students opinion.

Students also don’t want to speak for fear of making mistakes which in turn will result in embarrassment and subsequent loss of face.

Tips for dealing with Age hierarchy and Confucianism in the classroom 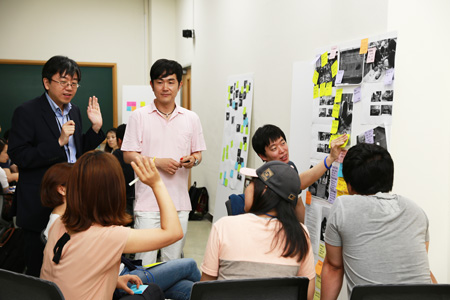 In Korea learning English is a subculture: a symbol of status. For some students it’s a hobby, for others they enjoy the social aspect of learning something new in a different environment and for yet others it’s a serious endeavor. Since these concepts of age hierarchy and Confucianism are so deeply entrenched in the Korean society, it is inevitable that you will encounter it in your classroom.

Age hierarchy does exist in Korea and can very easily exist in your class if you are not careful. Even though, it is socially acceptable in Korea, age hierarchy in the classroom hinders the learning process and should be nipped in the bud.

As a teacher you need to create a safe learning environment where students can practice their English. ESL classroom have a hybrid culture for the most part. There is a subculture of

sorts: a fusion of Western and Korean culture. This is important as it provides a neutral environment for students to learn, and they don’t feel bound by the same social obligations and behavior, that they otherwise would.

Encourage your students to speak, not be afraid of speaking up and making mistakes. Teach them about Western culture and how individual opinions are vital. Teaching ESL is more than just teaching the language itself. It is teaching a new learning culture as well. As students grow accustomed to the different environment and rules in the classroom they will open up and actively participate.

Another good way to deal with the age related issues is to include various group activities. Divide students into mixed age groups. Encourage your students to mingle and contribute equally. Motivate students to voice their opinions and foster a mutual respect for each other regardless of age.

The hierarchy is like a structure in the background, you cannot go over or around it. You just can’t get rid of it. As an ESL teacher, you have to be patient, understand the culture and work around it. You can try to minimize its adverse effects by creating a learning atmosphere that is free of cultural constraints. In doing so, both students and the teacher can have a more fulfilling experience.