Get ready for the Ajummas of Korea

The 아줌마(Ajumma)’s of Korea, they are the distinct society group of the country. Without these old-aged women of South Korea, would you never see a country as developed as South Korea. I guess it is because of these fierce ajummas that the country’s fall after the Korean war, came up from the ashes and now deemed as one of the world’s high-speed internet connected and wealthy country.

But who are these so-called ajummas of Korea? Back then during my Korean classes, my teacher explained to us wondering lads the famous term “아줌마” (ajumma). If you are familiar enough, ajumma clearly means aunt in English. Other than the other terms;  “이모 (imo)”. However, this infamous word, pertains a societal meaning that clearly describes Korea and it’s culture.

According to my Korean teacher, Ajumma is used to subject middle-aged women, married or unmarried, in Korea. However this term can also be used to call any women, already married, regardless of age. So if you are just 20, but got married, it is unfortunate to say that in Korea you are called ajumma or to be nice enough, your daughter’s or son’s name together with the word  “어머니” (Eomoni). So if your son’s name is Jay, you will be called Jay’s mother or in Korean Jay Eommoni.

In history, the old ladies of the a Korean household, especially among the nobles are already considered a great part of the family. Their grace and their support among their husband’s careers or their children’s future is as strong and condemning as anything. They are one of the most influential, being called “사모님” (Samonims). These beginning became the layout of how middle aged women act at present.

Other than the use of these term to the following situations, the most reasonable idea that the ajumma’s gain recognition is their presence to the still growing Korea. Surprisingly, anywhere you go in Korea, you would see Ajummas. The Ajummas clearly populate almost the whole of the country’s labor force. From the small restaurants, where they work as servers or cooks to the streets, were even the harsh weather occurs, they still boldly give you fliers. Supermarkets, market stalls, as janitors and now even as taxi drivers, the ajummas are truly the symbol of prosperity in Korea. 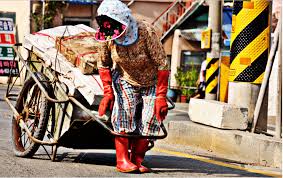 So what happens if you suddenly come neck to neck with an ajumma? Well, ajummas are clearly nice and kind people who would surely help you and even make you comfortable as possible. But then, once you try to disrespect an ajumma or try to act without manners in front of them, you’ll think twice not to do it again. Ajummas are considered stronger than even a young Korean guy. Why do I say strong? It is because  on the everyday, these ajummas would usually walk around carrying backpacks or worst use their small handbags to push you around. Also, if they shop, you wouldn’t see them carrying a small bag of some sorts but a sack. They are ajummas for reasons. Their dignified stand whenever they argue for a seat in the subway or push you when you are on their way. These ajummas will always be known for their power walks in big cover faced-sun visors or in their mountain climbing outfits carrying their walking sticks. They are old enough and experienced, as well, that is why they feel respected wherever they are.

And how do you easily spot, the Korean ajumma? It’s easy as like spotting a man from a crowd of women. If you are in the countryside, they are the permed-haired, stocking wearing, baggy but flower printed baggy pants wearing old-women.  If you are in the city, they are either in matching mountain climbing clothes, flower printed clothes with matching glittering umbrella or just simply wearing pearled necklaces on a simple frock.

Among all the other nations in the world, Koreans do only have the ajumma culture that can never be surpassed anywhere. Among other nations, where the old are not considered as important or not as strong influence as this, Korea has truly risen up from the ashes of the slump to a glorified ajummas that brought up the country’s feet.